skip to main | skip to sidebar

This might be the most painful paragraph ever written about President Obama:

Obama’s remarks provide a look into his mind, into his categories of thinking and into the boundaries of his conception. And in a way, the glimpse is comforting. ISIS is going for the ideological headshot, for a way to break his will, but Obama is like some dinosaur from the age of degenerate socialism, with a mind full of mush. There’s no central nervous system to disrupt, no will to break that hasn’t been broken already. ISIS cannot shatter Obama’s strategic plan if there isn’t one. Trying to scare Obama is like trying to terrify a cabbage.

My one real question - and, the one that I have been dealing with for years - is this: Is our Black Swan President about to be exploited? And, what does that mean for my TSP account? I mean, it is tragic that the civilian kill count in Syria is well over 220,000 - well over that of the 'W' era Iraq body count. And, now you have to add the Obama Iraq body count to that number. And, the Libyan body count. And, the Yemeni body count. And, the Egyptian body count, And, the Somali body count. And the Ukrainian body count. And, ... Leading from the behind just helps in stacking the bodies, eh...
So, when will one of the displaced millions hit us. We have watched them die while basking in the light of a Nobel Peace Prize. The only way to scare a cabbage is to kick it. My guess is that a cabbage scorned is a cabbage enraged. And, enraged cabbages do not react in a measured manner. Will it be an enraged and offended cabbage that turns the region into glass?

After reading Drudge's headline "Paper: Obama Threatened to Shoot Down Israeli Jets" I was brought back to a post discussing an Israeli airstrike on Iranian nuclear facilities I wrote a number of years ago.  In it I postulated that Israel could temporarily take an air field in eastern Syria to use as a sortie base for bombing nuclear targets in Iran.  The diciest part of the plan would have been traversing the Iraq/Turkish border in such a way as to avoid conflict with the United States or Turkey.  While conflict with the U.S. in 2006 was not likely, the political storm would have been massive and destructive.  Since we controlled the airspace such an attack would have had at least the implicit of the United States.

My, how nine years have changed things.


Those are interesting questions that dramatically change the calculus.  Here are some interesting maps from GlobalSecurity.com: 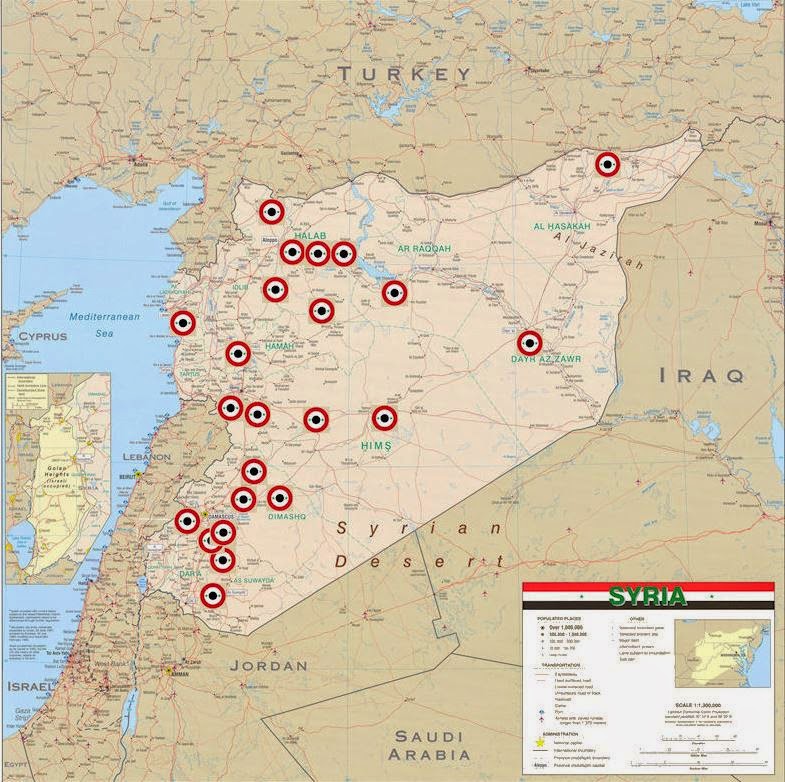 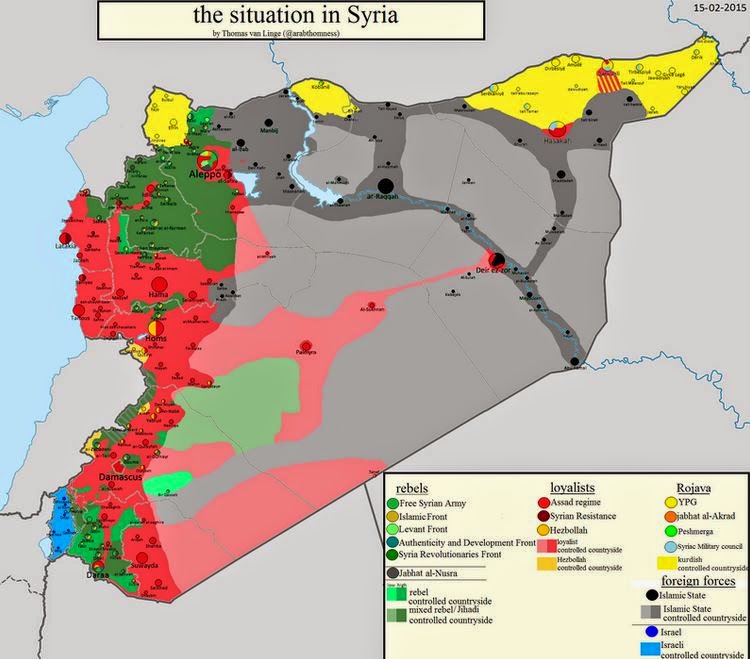 In this map note that the air field at Dayh An Zawr is controlled by ISIS.  The field I spoke about in the earlier post is contested by Hezbollah and other Islamist groups..  Also, note that the Syrian regime does not have much control of the region between Israel and the eastern air bases.  Thus the risk to Israel taking those eastern air fields has dramatically reduced since 2006.  An additional question:  Would the act of Israel taking an airfield from ISIS be an act of war on Syria?  I really do not think Assad would come to the defense of ISIS.

So, let us assume that Israel takes one of the two major airfields in eastern Syria - it would be much easier to do so now.  The following map documents the Iranian nuclear sites: This map (Joel C. Robinson) assumes an attack from Israel, overflying Syria, Turkey, and Iraq or Jordan and Iraq, or Jordan and Saudi Arabia.  Sorties originating from eastern Syria that overfly Iraq would only be half as long.  The F15s in Israel's inventory can reach those targets from any site in the region, the F16Is would have to be within 1,800 km (combat radius) - see below: 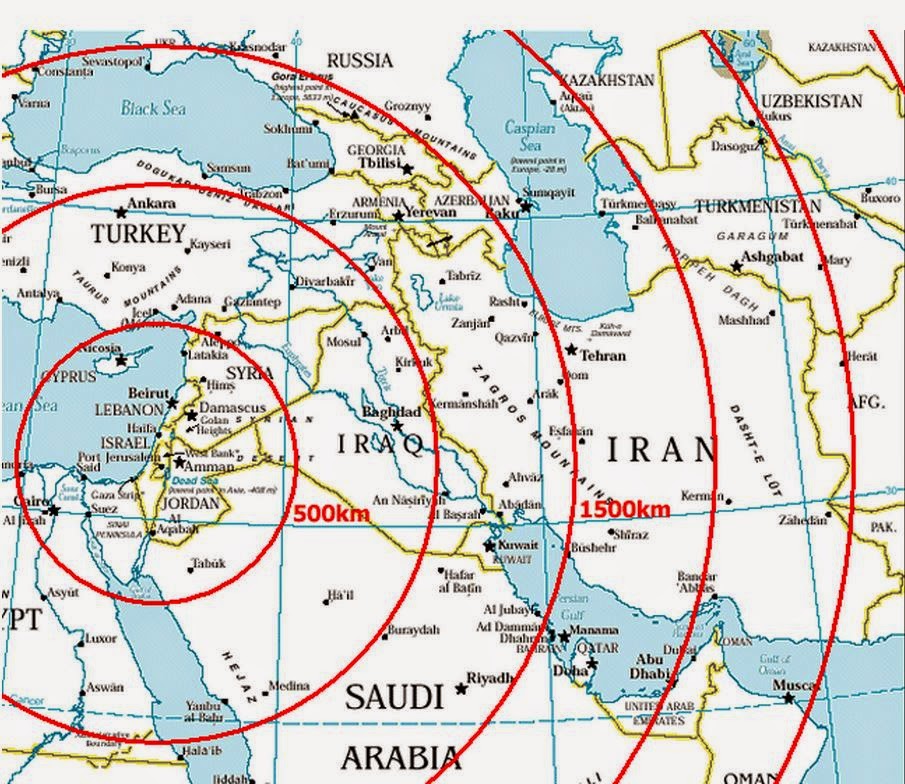 Move those strike circles east almost a thousand clicks and Israeli aircraft could easily hit any target in Iran without refueling and with enough fuel for combat action as well.

The final question would be whether President Obama would order whatever air superiority assets we have in Iraq to "shoot down Israeli' strike aircraft.  How probable is that.  Actually, that is not even the final question.  Here is one to ponder.  Would Air Force pilots ordered to shoot down allied aircraft attacking an enemy who wants to destroy that ally actually find any of the hundreds of strike planes overflying Iraq?  Or would they take off and not find anything - yuk, yuk.  Would they actually want to attempt to shoot down allied aircraft piloted by some of the best in the world.   That is an interesting question - eh.
Posted by Boghie at 13:31 No comments:

Geez, on Thursday the Monthly Treasury Statement will complete Fiscal Year 2014.  I can hardly wait to present proof of ObamaCare bending the cost of healthcare down.  Not to mention proving that our budgetary genius must certainly demonstrate that he is more spendthrift than Bush the Chimp.

Beers all around when 'The One' chumps 'The Chimp'.

Numbers do not lie.  Just wait till Thursday.  I am giddy with glee!!!
Posted by Boghie at 12:05 No comments:


Peter Lynch would be proud, impressed, and embarrassed at the same time.  We got ourselves a Three-Bagger in the making.  Already well into a double, but with three years remaining who doesn't believe in Obama.  Just $1.8 Trillion away.  Piker material.  He can do it in a year!!!
Posted by Boghie at 07:56 No comments:

Single handedly President Obama reduced the FY2013 deficit to a mere $225,426 Billion 'discount' to the Chimp's worst effort.  'W' - what a chump - could only generate a negative outflow of $492,334 (inflation adjusted) in FY2008.  And, he was only able to accomplish this pathetic effort during the very height of the housing and credit bubble.  What a piker.

We glory in Obama!!!


Earlier I postulated that Obama may be slipping:  "If this Administration continues to amaze me by reducing the FY2013 deficit by $6 Billion a month we will ONLY have an annual deficit of $457 Billion."  That was truly disappointing.

However, I knew I could count on him and his Administration.  Even with record income he strove to spend the best he could under the straight jacket impost by the Tea Party.

A 'Failout' is Always and Option

This is the most concise lesson learn document from the Obamacare failout I have read.  However, it also presents the best discussion I have read on the topic of technical engineering for bureaucratic planners.

It hits my Favorite Posts...

Photo Essay of Our Time

Pictures are worth a thousand words...

This is the cheapest and easiest 2,000 words I have ever typed. I could have finished my annual 'Daughters of the American Revolution' paper in minutes rather than weeks when I was a dumb youth.

The end goal of Obamacare is 'Single Plier Healthcare'.